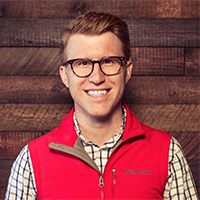 Red Sanders started his first successful entertainment company at the ripe age of 12. Since then, he has combined his entrepreneurial spirit, media expertise, and love of visual storytelling to create one of the top media companies in the Dallas-Fort Worth area.

Red graduated from Texas Christian University in 2004 where he majored in Radio, Television and Film, and studied in the Neeley Entrepreneurship Program. His first documentary film, REGENERATION, received an Emmy for Outstanding Student Achievement. His breakout feature film, SEARCHING FOR SONNY (starring Jason Dohring, Minka Kelly, Michael Hogan, and Masi Oka), won 9 best picture awards at festivals around the world before being released nationwide in 2012, available on iTunes and Amazon.

In 2014, he produced BALLS OUT (starring Jake Lacy, Nikki Reed, Kate McKinnon, Beck Bennett, and Jay Pharoah) which premiered at the Tribeca Film Festival in April of 2014 and picked up for distribution by MGM/Orion. Recently he produced A BAD IDEA GONE WRONG (starring Matt Jones, Will Rogers, and Eleanore Pienta), set to world premiere at the 2017 SXSW Film Festival, and ONE PERCENT MORE HUMID for Sony Pictures Worldwide. Red has several projects in development, including a TV series based on James Johnston’s award-winning short film, MELVILLE, feature films THE KING OF NORTH DAKOTA and FORSAKEN, both expected to begin production this year, and a biopic based on the life of Bradley Snyder, a Navy lieutenant blinded in combat and a Paralympic Gold Medal swimmer.

Writer/Director Van is an award winning photographer and filmmaker. His short films have been screened at the Los